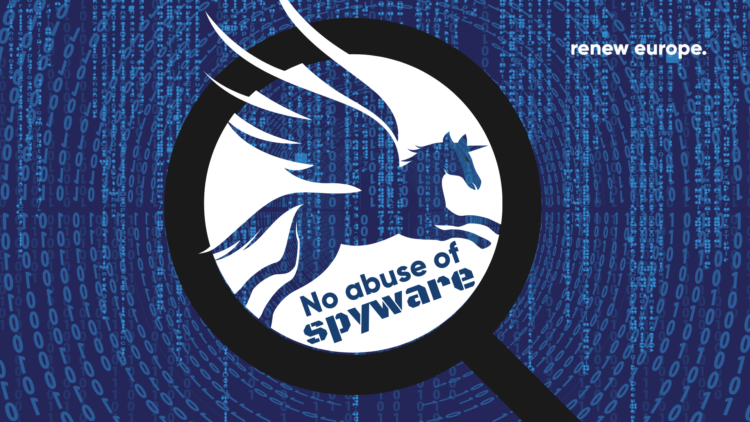 Renew Europe welcomes the growing political momentum for the establishment of a European Parliament Committee of Inquiry on the abuse of Pegasus Spyware by EU Governments against national opposition politicians, lawyers & journalists, as demanded by Renew Europe.

In today's plenary debate in the European Parliament, we repeat the need for a full inquiry that will investigate the cases, consult experts and call witnesses from across Europe, to finally put recommendations for further action on the table of the European Commission and national governments.

"With the Pegasus spying scandal, Europeans find themselves back in the darkest times of our past. State authorities are now again using these surveillance practices on opponents and critics is like the movie The Life of Others, but in today's Europe.

Considering that people have already been targeted with Pegasus spyware since 2019, the inquiry committee should also find out whether the European elections have been compromised. European democracy has to be defended and protected with all means."

We expect the decision to establish an Inquiry Committee, which would constitute the first significant action from an EU institution since the revelations that the spyware was used against EU citizens, to be formally approved by the Conference of Presidents in the coming weeks.

MEP Róża Thun, Member of Polska 2050 in Poland and MEP Anna Donáth, party leader of Momentum Movement in Hungary, as co-initiators of the inquiry, said:

"The Pegasus case is about democracy. Because in Hungary and Poland, the rule of law and human rights are being sidelined. Two governments in the EU have used terrorist cyberweapons against their own citizens. This is unacceptable; a European response is needed.

With the European Parliament's Committee of Inquiry on the Pegasus Spyware scandal, we will disclose all shady practices of Governments that invade the privacy of EU citizens and protect them from illegitimate surveillance in the future. Software created to protect us from terrorism cannot be used as a weapon against those who struggle for democracy."