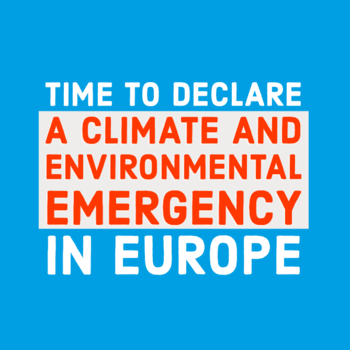 The European Parliament's Conference of Presidents have accepted today the proposal of the Renew Europe group for a resolution to declare the state of climate and environment emergency in Europe and globally. In view of the sustained rise in global temperatures, peaking greenhouse gas emissions and extreme weather events happening all over Europe, a growing number of states and local administrations have already made similar declarations. Renew Europe took the initiative to the next level, asking the European Parliament to adopt this resolution calling on the Commission and the Member States to take action accordingly and to initiate a society-wide mobilisation. The resolution is also in line with the negotiations of the EU's next multi-annual budget, where Renew Europe is fighting for further budgetary efforts to tackle climate change and turn the related challenges into economic opportunities.

"The next five years must be a game changer for our climate and our environment and our actions should be driven with a sense of emergency. The first 100 days of the next European Commission will be critical to deliver the right level of ambition for the Green Deal. Tabling this motion to declare a Climate Emergency in Europe, we send a clear signal: The Green Deal will not only be a list of regulations, it's a project for our generation, where Europe needs to show leadership and make a real difference to the health, environment and livelihoods of our citizens. This Green Deal will have a far-reaching impact not just environmental but also economical by boosting growth and creating jobs."

"It is time to declare a climate and environmental emergency in Europe. The fact that Europe is the first continent to declare a climate emergency, just before the COP25, as the new Commission takes office, and two weeks after Donald Trump announced that the US will leave the Paris Agreement, will send a clear message to citizens and to the rest of the world."