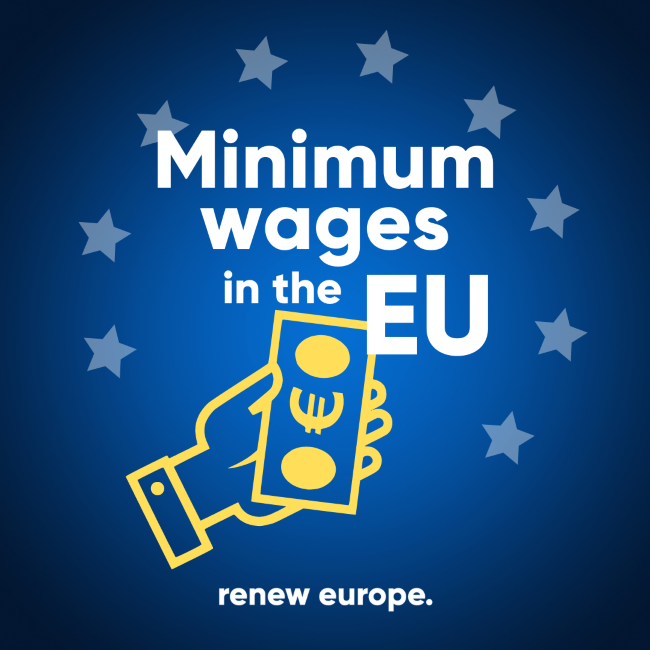 The Renew Europe Group in the European Parliament welcomes today’s inter-institutional agreement for a directive on adequate minimum wages in the EU, which establishes a framework to improve the adequacy of statutory minimum wages and promotes collective bargaining on wage formation, while respecting social partners’ autonomy and contractual freedom and the specificities of national systems and national competencies.

Our political Group is firmly committed to fighting poverty in all its forms and believes that wages should provide a decent standard of living for workers. For this reason, Renew Europe, through its political representatives, has worked hard during the negotiation process to achieve a balanced agreement, which establishes procedures for Member States to ensure the setting and updating of statutory minimum wages are guided by national criteria to promote their adequacy. All European countries should also promote collective bargaining on wage setting while respecting Member States national practices and traditions and their competences in the field of wage setting.

Likewise, the text foresees the impact of an adequate minimum wage on narrowing the gender pay gap, a key priority for the Renew Europe family, since according to Eurofound, women are overrepresented among minimum wage earners in nearly all Member States at more than 60%, despite typically making up less than 50% of the workforce.

The final agreement is an important milestone in our campaign to ensure a decent living for workers and reducing in-work poverty, as well as to build more inclusive and resilient economies and societies across Europe.

"I am proud of what we have achieved with this agreement. It is important that people that wake up in the morning and work hard all-day long can have a decent living from their wages. This directive will help reduce wage inequality and in-work poverty by ensuring that statutory minimum wages are adequate and regularly updated. It should also help to strengthen collective bargaining on wage setting in line with national laws and practices. This is a step towards a more social Europe, a fairer Europe, a European Union of respect for each other".

“We have been working for the past years on this key policy for delivering a new tool against at-work poverty. I believe that the EU can play an important role in assisting the Member States in coordinating their policies and that, while respecting national practices, the Minimum Wage Directive can bring greater access to social dialogue for more EU citizens, opening up new opportunities for them to be heard”. European citizenship has not yet been fully implemented. It is a unique construct that does not…
Read more